"Hell on Wheels" - Empowering the Disabled 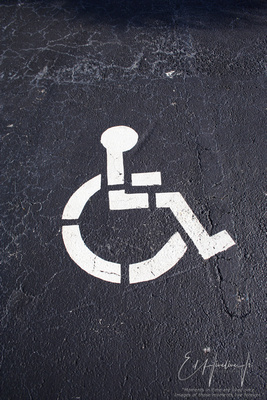 In July of 2007 I walked out of my office building and noticed the disabled parking symbol painted on the black asphalt.  Typically I see these symbols painted in blue as opposed to white.  What caught my attention was how the prevalence of asphalt cracks stood out.  I was struck by the irony of how this perfectly painted symbol stood out on such an imperfect canvas.  After seeing what I photographed, I created a modification which I titled "Hell on Wheels - Empowering the Disabled" which was inspired by a young man hired in my division as a draftsman that was severely disabled.  He was my inspiration because he did not have the ability to use his arms or legs and he lived in his wheelchair.  He was a very competent draftsman and performed his duties through verbal commands to the computer system.  His attitude was that he could accomplish anything he wanted, I would tell him often that he was "Hell on Wheels".  I did not realize the significance of all this until 2011 when my daughter became disabled herself.

In August 2011, at the beginning of my daughters high school senior year, she was given a meningitis vaccination that caused an onset of what is now believed to be Guillain-Barre Syndrome.  A person who appeared to be perfectly healthy now had issues walking.  Over the next nine months she needed the assistance of a walker and physical therapy to get from one location to another.  Fortunately she has recovered and is now walking, running, and participating in an exercise program at the local gym. 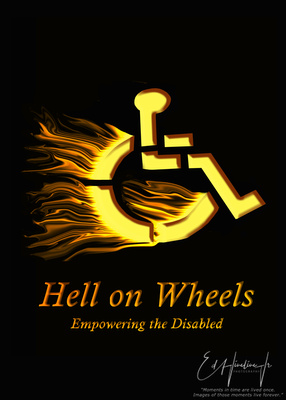 Hell on Wheels, Empowering the DisabledTribute to the spirit of the disabled.

Knowing what I now know, I am resurrecting the images from 2007.  These images are dedicated to anyone inflicted with some type of disability and made the decision to not give up and continue to move forward.  My daughter decided that she was going to finish her senior year, and she did.  She decided she was going to walk across the graduation stage without a walker, and she did even though it was very difficult.

My images are intended to empower individuals to be the very best that they can be.  My draftsman colleague and daughter refused to allow their physical situation hold them back from accomplishing there goals.  My hopes are that someone will see the image and say to themselves, "Yes, I am " 'Hell on Wheels'".

Have you had a similar experience, I'd like to hear about it.

"Moments in time are lived once. Images of those moments live forever."