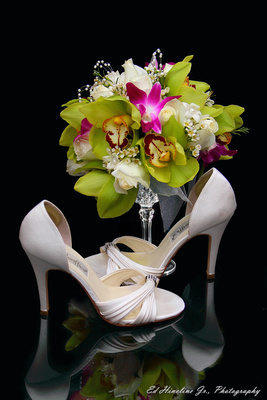 I've attended many weddings, including my own, where I was able to observe the wedding photographer shooting images of the ceremony,  family members, and the reception.  From an observers point of view, shooting a wedding appeared to be a routine operation.  I believed this until I was presented the opportunity to shoot a wedding myself.

A young lady that works for me approached me stating that a couple she knew was getting married and there was an issue with engagement photos that were taken.  They needed new photos shot prior to their wedding scheduled in two weeks that would serve as part of a signing board for guests when they arrive for the wedding and reception.  The couple had an idea of what type of pictures they wanted and had a location staked out on the beach.  I agreed to shoot the images for them because I felt it would be a good learning opportunity and be fun.  As it turned out, they were a very nice couple and I learned in the days following the shoot were in need of a wedding photographer.  I agreed to help them and this is where I began to understand the true components, complexities, planning, and stresses placed on wedding photographers.

I have a deep respect for wedding photographers now.  My father, a professional photographer, shot a couple of weddings and advised me many years ago that he would not shoot them again.  He said there was too much pressure and it was difficult to make people happy.  People were now disappointed in the quality of images, but more in how they looked.  Keeping in mind that he was shooting film as opposed to digital and did not know the quality of images until after the film was developed and the proofs were printed.  My own wedding photographer made an error in camera settings and all of my ceremony and family shots were badly underexposed.  Fortunately we owned a film processing lab and were able to fix the problem in post production.  I entered this wedding shoot very nervous because of advise and past events, but I had peace of mind knowing that the couple ensured me that they would be happy with the results however they turned out.

Prior to the rehearsal and wedding I had the opportunity to meet the bride at the church and reception hall.  This allowed me to understand the environment and talk to her about her expectations for the shots she would like to have.  I used this time to observe lighting conditions, potential backgrounds, and general shooting opportunities.  I also took some test shots so that I would not be presented with any surprises.

The engagement photos and the wedding rehearsal were very relaxed affairs with a small number of people.  I had time to converse with the family and shoot very casual images.  These events gave me the opportunity to build a personal bond with the families and participants in the wedding.  I also witnessed how the ceremony was going to be performed and where the participants would be staged for entrances and exists.  I was determined to be prepared and not go into the wedding event "cold" and to be "shooting from the hip".

The Wedding and Reception

I never realized how much planning and quick thinking goes into shooting a wedding, as well as how "fast on their feet" a wedding photographer has to be.  I was shooting solo and arrived at the church early.  I knew when the bride and groom were going to arrive and the rooms they were going to be dressing.  What I didn't take into consideration was they both were on different schedules and the grooms dressing room was on the first floor and brides was on the second.  I was up and down the stairs with my equipment multiple times trying to capture important images as they both prepared.  An assistant would have been helpful, at a minimum just with communication.  I was able to get the pre-ceremony images I needed even though it was a little stressful.  My biggest hurdle was getting into position and shooting around other people that wanted to get quick snapshots as the bride was preparing.   My preparation was successful once the wedding started because I knew where to position myself throughout the ceremony.

I appreciate now a professional photographers aggressiveness following the ceremony to shoot the pictures of the bride, groom, family members, and friends.  I learned that there is a very tight time frame to shoot the images and it is difficult to gather the appropriate people and pose them.  Everyone wanted to congratulate the bride and groom.  This is again where an assistant would have been helpful in staging the people the bride and groom wanted photos.

This was a very positive and fun experience.  The bride and groom were a very nice couple and they were pleased with the end product.  The valuable lessons I learned:

This was a great experience for me and I may shoot another wedding if provided the opportunity.  I gained a new respect for professional wedding photographers.  Shooting a wedding is not as easy as it appears and takes a lot of planning, communication, and creativity.  Kudos to the Pros!

"Moments in time are lived once. Images of those moments live forever."